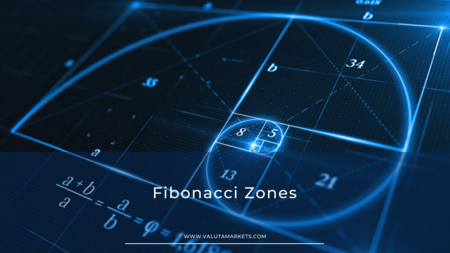 Fibonacci zones are a time-based technical indicator. They are a series of vertical lines spaced at the Fibonacci intervals, i.e., 1, 2, 3, 5, 8, 13, 21, etc. The starting point of these time zones on the chart is usually a major high or low. The lines extend rightwards to indicate time zones that could result in more significant swings, lows, highs, or reversals.

The Fibonacci zones that correlate to the time on the price chart’s x-axis are based on the Fibonacci number sequence. Their function is to anticipate significant price changes near these areas. These lines are plotted at intervals beginning at the bar selected by the plotting tool.

Traders use Fibonacci zones to divide a specific period into smaller sections. Their lengths are the consecutive Fibonacci numbers. The end of each short period might indicate an important change in price. Instead of focusing on the price aspect of price movements, Fibonacci time zones focus on timing, unlike several charting techniques.

When using this tool, you have to choose a unit time interval as your reference. The next step is to plot vertical lines on the number intervals 1, 2, 3, 5, 8, 13, 21, 34, and 55, where you can anticipate new support or resistance levels. Interpreting the Fibonacci zones includes identifying significant price shifts near the vertical lines.

Fibonacci time projection uses time zones, and it is among the four most used Fibonacci studies for technical analysis. A trader must first measure time intervals on a chart as a time base increment to generate a time zone, anywhere from one hour to one day. To generate the most effective Fibonacci zones, choose a base interval described by the time between two markets, tops or bottoms.

Next, multiply the base increment by 1.618, the golden ratio. This step aims to discover the time length from the base interval’s end to the first Fibonacci zone. Future time zones are determined by multiplying every successive interval between the zones by 1.618. Theoretically, Fibonacci time zones are areas where you can expect significant market events. That could be something like a large price change in the direction of a trend or the reversal of a current trend.

Practically, Fibonacci zones have a large measure of predictive power. Occasionally, large price events can happen between the zones, although these time zones often still align with price events of certain dimensions. Due to such inconsistencies, you should only use the Fibonacci time projections and zones as guidelines.

Instead of using them independently, you are better off using them with other technical analysis tools.

To draw this technical analysis tool, click on it and use your mouse to define two points on the market chart, to set the length of this unit interval. Additional variables that will appear near the endpoint are:

The other lines are plotted based on this unit interval.

There are three unit interval lines, and you can move them using a mouse. The first and last points are for altering the direction and length of these lines. The central point, also called the moving point, moves the tool without altering its dimensions.

It is possible to adjust the Fibonacci time zone construction settings. This tool also has the following parameters:

Fibonacci time zones are a subjective analysis tool since the starting point will differ depending on the trader. Furthermore, several charting platforms permit traders to select how much time the zones represent, which also adds to the subjectivity of the tool. Because of all this subjectivity, the indicator may lose its usefulness altogether.

The tool might show the time zones where the price could experience a high or low when set correctly. Unfortunately, these may be minor rather than major highs and lows since the indicator doesn’t offer information on the magnitude of these movements. It doesn’t usually provide the exact turning date, making it challenging to establish whether the indicator is indeed predictive or just randomly appearing near certain reversal points.

Fibonacci is an effective technical analysis indicator, but you should not use it independently. Consider combining it with price action, trend analysis tools, and other technical indicators. You could also combine it with a fundamental analysis tool if your strategy allows.