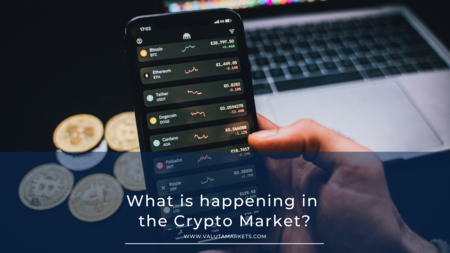 Cryptos are virtual mediums of exchange occurring as digital assets. They utilize cryptographic functions to undertake financial exchanges and use blockchain technology for immutability, transparency, and functionality. Unless you are living under a rock, you must have heard of this currency in one context or another.

There are over four thousand different types in the market, the most popular being Bitcoin. This number is set to increase in the coming years. Cryptos are placed under different market caps. Those with caps ranging between $ 1-10 billion are mid-cap, while those with a cap of less than $ 1 billion are small-cap. The latter is riskier since they have significantly higher chances of failure than their counterparts.

Now that you know what cryptocurrencies are, here are some important events and trends currently happening in the crypto world.

Increased volatility in the market persists.

The market is still experiencing extra volatility, and these ups and downs are bound to persist in the foreseeable future. Investors continue to contend with geopolitical tensions, potential revisions of the U.S. monetary policy, and rising inflation. The Federal Reserve is set to meet this week to initiate the withdrawal of the unprecedented stimulus provided to U.S. citizens during the COVID-19 pandemic.

This development might affect digital assets as well as broad markets overall. Since cryptocurrency is now more widely used and has recently become aligned with the stock market, it is more impacted by macroeconomic factors. One of the top cryptos, Bitcoin, has been spiraling downward over the last week, although it registered an uptrend on Wednesday, trading at almost $39,000. This is also the case for Ethereum, which traded at near $2,800 on Wednesday.

Edward Moya, a senior analyst, wrote that Bitcoin is awaiting the Federal Reserve policy decision and is struggling to rally up to its investors who are being cautious about buying. Market experts advise against making any crypto decisions based on current hype or news.

On the 27th of April 2022, The Central African Republic parliament unanimously passed a bill making Bitcoin their national currency. CAR became the second country to adopt the currency after El Salvador, which adopted it last year. Although it is said to be a unanimous decision, reports from BBC News show that Martin Ziguele, the nation’s former prime minister, alleges that it was approved ‘by proclamation”.

President Faustin-Archange Touadera’s office has reported the move as one that will improve the conditions of CAR citizens and distinguish the country as one of the most visionary and boldest worldwide. News of the motivation behind this move has brought a lot of confusion among financial experts and geopolitical analysts.

Although this land-locked country is rich in natural resources such as uranium and gold, it remains among the poorest globally. CAR has been plagued by civil war since 2012, and of the 4.8 million population, only about 11% have access to the internet. It is also among the six nations using the CFA franc as its currency on the continent. This currency is backed by France and attached to the Euro.

Some have attributed the adoption to the nation’s attempt to undermine the CFA franc and rebuke their former colonial power. Others say it could be related to the Central African Republic’s close ties with Russia. It is crucial to remember that CAR was among the few nations that decided to abstain from casting a vote in the United Nations to condemn Russia’s invasion of Ukraine.

They have also been condemned for deploying mercenaries to fight rebel groups within the country.

Tesla, Blockstream, and Block Partner to Mine Cryptocurrencies in Texas

Earlier in April, Blockstream announced that it had joined forces with Elon Musk’s Tesla and Jack Dorsey’s Block (formerly known as Square) to construct an open-source solar-powered facility in Texas to mine Bitcoin. Blockstream acknowledged that construction had begun and that the three companies intended to be transparent with the public.

They will share knowledge gained from building a renewable energy-powered Bitcoin mine. As per the company’s tweet, they hope to show that combining Bitcoin mining and renewable energy champions for a clean energy transition. Blockstream is responsible for providing the expertise and infrastructure for this project. The goal is to complete the facility this year.

They also pledge to release regular reports on the economics of the project in addition to a publicly-accessible dashboard that will display precise real-time metrics of this facility’s performance.

Billionaire Warren Buffer recently criticized Bitcoin, where he termed it a non-productive asset that doesn’t produce anything tangible. The Berkshire Hathaway CEO has previously been vocal about his skepticism of cryptos, particularly Bitcoin.

During his company’s annual shareholders’ meeting, he announced that he wouldn’t purchase all of the Bitcoin currently in the world for $25 to reaffirm his negative view of this currency.

If you are interested in investing in cryptos or are just beginning, remember that the best thing you can do for yourself is to have a plan and stick to it. This will save you from mistakes arising from impulsive decisions.