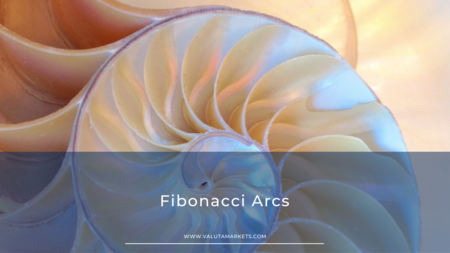 Fibonacci arcs are half-spheres extending outward from the baseline, a line connecting a high and low. The radii of these arcs are based on Fibonacci ratios. After an upward trend, Fibonacci arcs might indicate support zones. On the other hand, they could signify the resistance zone after a downward trend.

To create them, one must first draw a line between the high and low, followed by sketching three curves that intersect with it at 38.2%, 50%, and 61.8%, the key Fibonacci levels. Investors make trading decisions when an asset’s price crosses through these levels. This arc is among the most common Fibonacci studies used for market analysis regarding support and resistance levels.

What is the formula for Fibonacci arcs?

Nothing is needed to calculate Fibonacci arcs. Charting software is responsible for drawing them on behalf of traders. Unlike other tools such as Fibonacci retracement, which are more straightforward, Fibonacci arcs can be somewhat confusing to understand. So, even though there is no formula, there are a few key points to consider when drawing the arcs. It is in your best interest to follow these guidelines.

With this list, you can pursue the general Fibonacci rules. Based on whether the retracement succeeds or not, traders can then trade in the reversal’s direction or the previous swing wave’s retracement. It is also better to use Fibonacci arcs with another tool rather than using them in isolation. That is because they are only possible support and resistance levels with the added time factor.

Fibonacci retracements align with the Fibonacci arcs at the intersection points in the baseline. If you draw these two using the same baseline, there will be an alignment of the retracement level at the arc and baseline intersection.

Retracements are horizontal levels; hence they can remain fixed over a given period. In contrast, Fibonacci arcs only occur at the intersection point once. They will move based on the arc’s radius over time. Arc levels are active, while retracement levels are static.

Fibonacci arcs have some limitations of their own. Firstly, it is unlikely for the price to respect a Fibonacci arc level’s exact price. Therefore, placing a purchase order at one of the different pullback levels will not be a practical strategy.

Another drawback to arcs is that plotting arcs is also somewhat subjective. If different people connect varying highs and lows, they are likely to get different arcs. If these arcs are being used for trading, the results will vary, sometimes dramatically. This fact alone makes testing Fibonacci arcs a rather tricky strategy.

Because of the mentioned limitations, traders generally use Fibonacci arcs as confirmation or analysis tools rather than using them to provide trade triggers.

Fibonacci arcs are a riveting chart overlay since they take both price and time into account. It would be best to use them as an analysis or confirmation type tool to highlight areas that will probably provide resistance or support. In case you get a trade signal from the strategy, and it occurs around one of the arcs, then it is possible for the Fibonacci arcs to confirm this signal.  Like other annotation tools, avoid using arcs as a standalone system. Also, remember to test and practice using an indicator before using arcs with real capital. It will prevent any unnecessary and significant losses since you are just starting.